These specialty windows feature blinds or shades sandwiched inside the glass. They typically use a slide feature that raises and lowers the blinds. Depending on the brand, you'll find the built-in blind feature for both windows and doors, particularly patio doors. The built-in blind feature is appealing for patio doors because you don't have to deal with opening and closing traditional sliding door blinds to go outside.

Advantages and Disadvantages of Built-In Blinds

It's always important to weigh the pros and cons of a major decision like new windows. Choosing built-in blinds has distinct advantages and a few disadvantages to consider.

Built-in blinds give you an alternative to traditional replacement windows and hanging blinds. Consider all of your options before making your final decision. 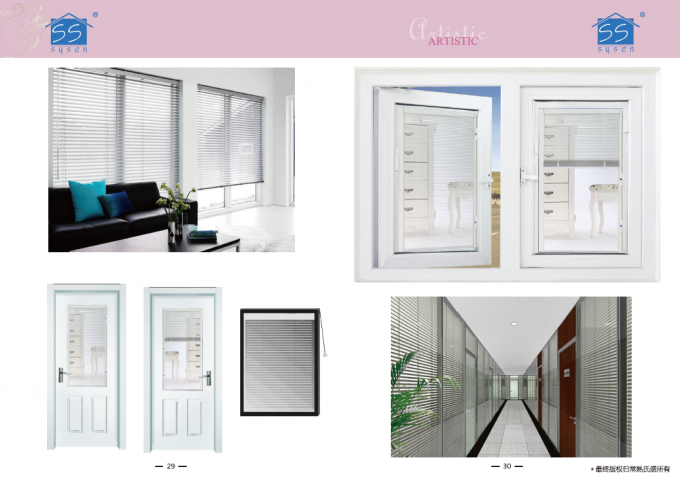 A window blind is a type of window covering.[1] There are many different kinds of window blinds which use a variety of control systems. A typical window blind is made up of several long horizontal or vertical slats of various types of hard material, including wood, plastic or metal which are held together by cords that run through the blind slats. Window blinds can be maneuvered with either a manual or remote control by rotating them from an open position, with slats spaced out, to a closed position where slats overlap and block out most of the light. There are also several types of window coverings, called shades, that use a single piece of soft material instead of slats. 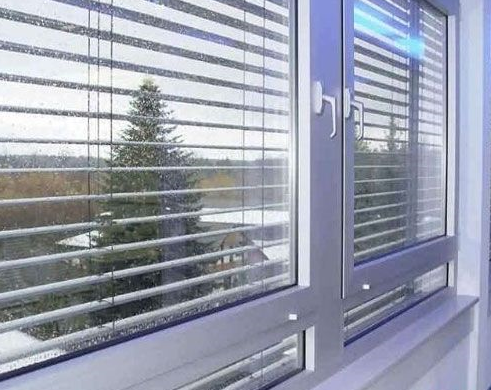 Window blinds stopper. An old window part to prevent open window blinds from closing. From the Sarona Museum in Israel.

These blinds can be classified broadly into five different categories: roller blinds (which do not have slats but consist of a single piece of material), Roman blinds, pleated blinds, Venetian blinds, and vertical blinds.

Many window blinds are made with slats of fabric, metal, plastic, or wood that are adjusted by being rotated from an open position (in which the slats do not overlap) to a closed position (in which they do). Metal window blinds are often used outside of a home or business to protect against theft, temperature, onlookers, glare, bad weather, or fire (in fire-prone areas); often, these blinds are machine-operated, rather than hand-operated.[citation needed]

Horizontal blinds use a thin woven corded "ladder" system to suspend the slats and enable them to be closed or opened via a rotating drum to which each upper end of the woven ladder is wrapped and attached. A lift cord allows the blind to be pulled up and stack tightly to top of the window when desired.[citation needed]

One of the earliest patents for a window shade was filed in 1888, by George L. Castner.[2]

Vertical blinds use a generally wider slat and one can pull a cord to stack the slats together, to one side, or to separate them in the centre and stack them on each end. The slats can be rotated via a rotating shaft in the upper head rail housing, which runs through independent geared carriers that convert the twisting of a tilt rail to a rotation of each individual slat in synchrony. The original vertical blinds were invented in Kansas City, Missouri by Edward Bopp and Fredrick Bopp, who held the original patent. The company name at the time was Sun Vertical. In the 1960s, the patent and company were sold.[citation needed]

The term window blinds is also sometimes used, somewhat inaccurately, to describe window coverings generically—in this context window blinds include almost every type of window covering, including both curtains and blinds for homes and commercial premises, such as bars/pubs, offices, and shops, e.g., Plantation Shutters/Jigsaw Shutters, Roman blinds, roller blinds, and of course, vertical and horizontal blinds.[citation needed]

In Britain, awnings and window shutters are often categorized under blinds, which are so named because they limit observation and thus “blind” the observer to the view. The main types are slat blinds which can be opened in two ways, and solid blinds, which can only be raised or lowered, and are sometimes called shades.[citation needed]

Some types of blinds, such as Holland blinds and woven-wood blinds, have small spaces between the slats. Others, such as pleated shades, have no spaces, because the slats are sewn inside fabric.[citation needed]

Window blinds reduce the heat from sunlight. Ancient Egyptian pharaohs had blinds made of reeds. The most inexpensive blinds in the 19th century were home-made roller blinds, made of cloth.[citation needed]

Window blinds can be manually drawn using a cord, or automated through motorization. Controls for motorized blinds can be from a wall switch or keypad, remote control, or computer, eliminating the need for cords and allowing control of otherwise inaccessible windows. A number of modern homes are integrating blind control with central C-Bus solutions. This control provides ease-of-use and is effective for controlling blind operation to reduce heat loss during winter or minimize heat from the sun during summer.

Windows With Within Blinds

Edge: All kinds of edges

LOGO: As per customers' demands